■Summary
Designated by the Government of Japan as “a zone with a high possibility of developing a pioneering approach for formulating a hub that accumulates industries and functions that become an engine for economic growth in Japan”. In special zones, preferential measures and support measures such as regulatory exceptions, corporate tax reductions, etc. are available.
Due to the “Keihin Coastal Area Life Innovation International Strategic Comprehensive Zone” designation from the Government of Japan in December, 2011, Kanagawa Prefecture, Yokohama City, and Kawasaki City maximally utilize regional resources gathered in the Keihin Coastal Area, including industry base, while invigorating the industry for medical products and devices with global business leadership. These three parties also promote efforts towards the realization of economic growth and life innovation, releasing a ripple effect on related industries, small-medium businesses, and improvements in international competitiveness. 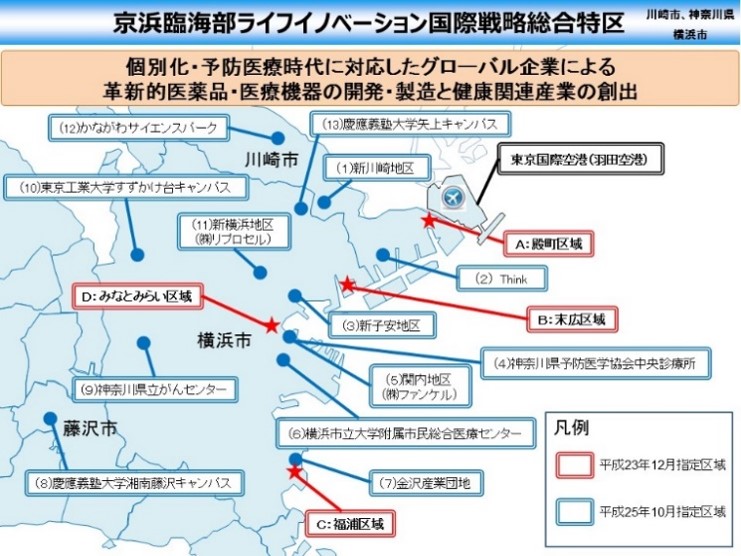 ■Summary
National Strategic Special Zones are for strengthening the international competitiveness of industry by predominantly implementing socioeconomic structural reforms. And from the perspective of promoting the formulation of a hub for international economic activities, these zones are also designated areas by the Government of Japan for the unification of localities with businesses and implementing policies such as comprehensive and intensive regulatory reform where the government takes on a leading role.
Kawasaki City was designated as part of the Tokyo metropolitan area which encompasses Chiba Prefecture’s Chiba City and Narita City as well as Tokyo and Kanagawa Prefecture.

■Related Links
Prime Minister’s Office of Japan
for details about items such as cabinet decisions, regulations related to National Strategic Special Zones, as well as the status of various national considerations.